No posts.
No posts.
Home
Subscribe to: Posts (Atom)

In my early years I had an extensive collection of Airfix soldiers, the 1/72 scale plastic figures. In my teens I moved onto wargames, with tanks mostly, 1/72 and 1/300, but I was always building dioramas. My mind moved to other things from around 15 and I lost all interest.

I always found building a diorama to be far more rewarding than simply building a model, they were my expression and art. In recent years I've been promising myself that one day I'd pick all this up again.

I still have the 1975 'Military Modelling' article on Norman Abbey's BMSS award winning diorama of Isandlwana using the beautiful Sanderson 54mm figures produced then by Hinchcliffe. That diorama inspired me and doing something similar has always been an ambition, though 3 years ago I found that those Hinchcliffe figures were no longer in production. Just after that I decided that I should get on with fulfilling this ambition before, one way or the other it was too late. Two years later and I've just about finished my first diorama for 30 years and because of the lessons I've learnt, products I'm (still) discovering and that new skills I'm developing I'd thought my work and my experiences maybe of interest to anyone else that is also contemplating rediscovering this passion.

This is my first attempt at 'blogging' so it's all very much a work in progress.

I started reading about Isandlwana and Rorkes Drift when I was young and this knowledge has been developed further with me gaining a much more detailed understanding of both. For various reasons I decided to produce an Isandlwana diorama first and we'll see about Rorkes drift later. I won't go into detail about the battle, there's so much been written about it and so much available online. I'm also assuming that if you're reading this you know enough already and in my finished diorama you'll recognise apsects of the battle, a lot of thought went into the positioning of all the figures, and I've also paid homage to some well known paintings of the battle which will also hopefully be recognised. But this is about the making of the diorama rather than the history of the battle.

There has been a certain amount of 'artistic licence' applied in the creation of this diorama, for instance, General Dornford's body was found with around 160 British bodies around him and this was a few hundred yards or so away from Captain Younghusband's stand before he and around 14 others reportedly moved up the sloped of Isandlwana and continued firing until running out of amunition, shaking hands and charging into the Zulu mass. I've included the references to ammunition difficulties, the handing of the colours over to Lt Melville to carry to safety, and tried to reflect the gaps in the line - although further out from camp - which undermined the defence. I've also added a couple of homages to the Norman Abbey's diorama. You'll also recognise the positioning - almost at the slopes of Isandlwana after the British had been pushed back, initially onto, but then back through the camp- I'll add the watercolour of the camp site and indicate where I've set this. But I have tried to keep this as accurate to known history as possible.

I trawled the web trying to find those original Hinchcliffe 54mm figures or something similar but apart from the occassional single figure I could only find numerous makers of 1/32 plastic figures, which although there was a varied selection that was somewhat adaptable, the qualities I was looking for weren't there. My searches kept leading me to 28 mm figures and a much larger variety with many more producers and although working with this scale was completely unknown to me this was the scale I settled on.

British - I initially purchased the Wargames Factory (WF) hard plastic figures. They offered good value but once I openned the box it was clear that although good wargames figures, I had issues with the moulding of equipment on the figures and decided I wouldn't use these as my stock figure. Following much more research and several purchases I settled on using Empress Miniatures (EM) and Black Tree Design (BTD) figures for the majority of my figures. Both metal.

Black Tree Design (BTD) - I wasn't keen on the ridges on the helmets of the BTD figures so initially I was filing and grinding these down, after many hours I then simply cut them off (sometimes including the head) and replaced them with WF and EM heads and helmets. But the BTD figures are very good and they frequently have reductions which make the figures very affordable at about the same cost per figure as the plastic WF figures.

Empress Miniatures (EM) - I was impressed with the range of figures produced by Empress Miniatures which include not just the 24th but Natal Mounted Carbineers and Police, Newcastle Mounted and Buffaloo Border Guard plus the Boers - with mounted and dismounted figures. I hear there's more coming (in hard plastic) - the only issue I had with the range was the lack of casualties (same for BTD), some figures were a bit 'skinny' and some of the poses were a bit 'exact'.

Redoubt Enterprises (RE) - I found their range of poses really useful, really filled the gap when it came to melee poses, carrying ammunition boxes, handing out ammunition etc, I think you'll notice the poses that are more actual battle (although many are my conversions). They also do a nice range of Sudan figures which are easily converted, and a useful range of casualties. Plus they produce General Service Wagons and Ox Wagons. All very reasonably priced and with individual figures available. My only issue with the Redoubt figures was the size of some of the figures - more 32mm - but still useful.

I also used a handful of figures produced by Spencer Smith Miniatures, not the best quality mouldings, but very cheap and good poses which formed the basis for several coversions.

I did use a few Wargames Foundry figures, probably the most expensive figure and very good figures with a nice range of poses, I just had a real issue with their moulding of the Martini Henry rifle. Speaking of which, you might notice that hardly any of the bayonets on the figures are the orginal. I think the Martini Henry rifle with the bayonet - the 24inch bayonet -is a sexy piece of kit. But the bayonets are generally moulded as short and chunky. So most of the bayonets on my figures have been handmade using either, Milliput, Greenstuff or plastic card. I also found that the BTD figure bayonets had enough 'flash' on there to keep and file to a point.

Finally - for the British - I used lots of 'Old Glory' casualties, a nice set of variations, only 25 mm, but hopefully where they're positioned no one will notice - besides I remember my father saying something along the lines of everyone being the same size when laid down.

Although there are also a lot of conversions using figures by all the above producers, torso's, heads, arms, legs, hands, feet and with numerous modications to achieve the positions needed. I won't go through the range but please ask if you're not sure how I achieved a certain pose.

I was very lucky with the Zulu figures. I settled quite quickly on using the Wargames Factory hard plastic fgures with an almost equal number of Black Tree Designs, with a few additional extra figures from Spencer Smith and Old Glory.

Wargames Factory - a very useful product indeed, their Zulu's came 30 in a box with a large number of spare heads and arms so there was a wealth of alternative poses. Plus, with saw and scapel to legs and torso's an almost infinite range of other poses beckoned. The heads and arms were also very useful for converting other figures. I also really appreciated the number of shields, spears, Martini's and muskets provided in each box, allowed me to standardise all my Zulu's.

Black Tree Design - I really liked their figures, and with frequent sales they worked out at about the same cost as the WF figures. Many of these were altered using WF heads and arms. Some nice casulties too.

Spencer Smith Miniatures - Same as for their British figures, a couple of really useful poses which I could build on. The bodies weren't brilliant but in the mass they're not that noticeable, and again some nice casulties.

Redoubt Enterprises - they do an ok range but wasn't generally keen on the figures so just used a few useful casualties.

Old Glory - just used the one pack of casulties. Only 25 mm but I don't think the slight difference in size is that noticeable. 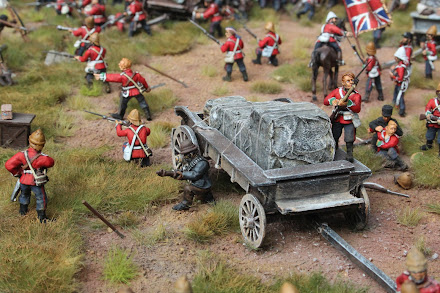 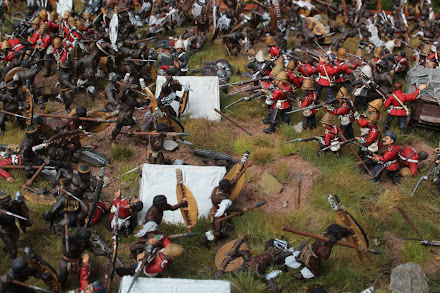 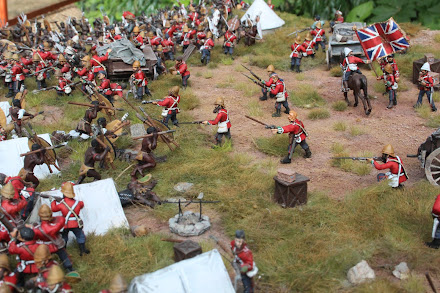 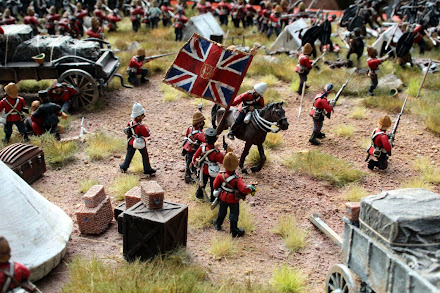 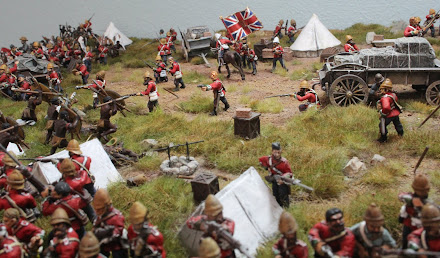 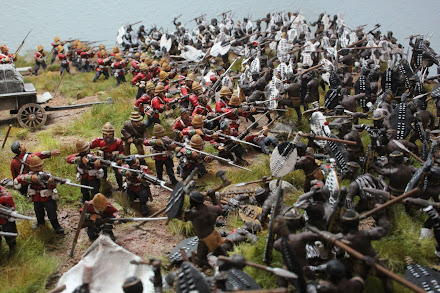 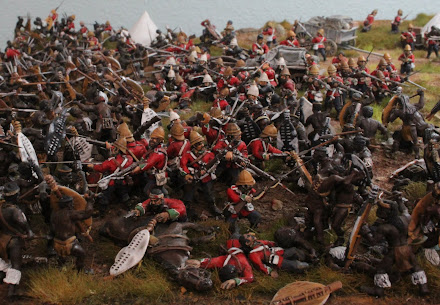 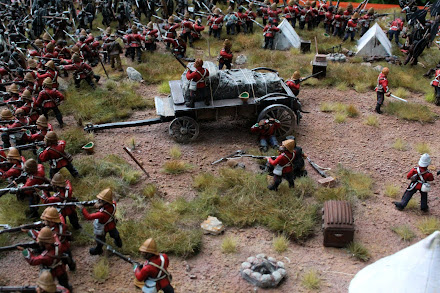